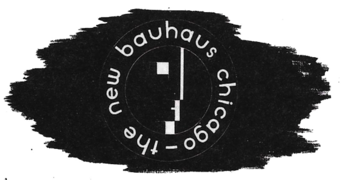 We say THE SCHOOLS, three names and five locations, but in another sense it was the unfolding of one idea and one school of director Moholy-Nagy’s creation. This reality, now history, was set in motion by an opportunity offered by the Association of Arts and Industries in 1937 while Moholy and his family were living in London.

​The basic goal of the Association of Arts and Industries was to improve the quality of design of manufactured goods in the Chicago region. Although the Association engaged in a variety of activities in pursuit of this goal, from its earliest years [founded 1922] it devoted the major portion of its resources to design education.

Walter Gropius, the founder and first director of the German Bauhaus, had arrived in the United States in March of 1937 to accept a position as professor of architecture at Harvard University. Norma Stahle [executive director of the Association of Arts and Industries] wrote to him on May 14, asking him if he would be interested in coming to the Association’s planned new school. Gropius promptly replied that he intended to remain at Harvard for an indefinite period, but he recommended Moholy for the position of director in Chicago. Gropius described Moholy as “my nearest collaborator in the Bauhaus” and added that Moholy “is endowed with that rare creative power which stimulates the students.”

Moholy was invited to Chicago for an interview, was offered the job, and accepted it. A public announcement was made on August 22; Moholy would be director of “the New Bauhaus, an American School of Design,” and it was he who decided the school should be called the New Bauhaus.

Thus the stage was set for the beginning of Moholy’s educational undertaking in Chicago at the New Bauhaus, which operated in 1937 and 1938; this was followed by an independent school begun by Moholy in 1939, the School of Design in Chicago; and this, in turn, was re-organized in 1944 and renamed the Institute of Design. The I.D. later [December, 1949] became a unit of the Illinois Institute of Technology.

Before discussing each of the schools in turn, it is worth noting what they shared. Most important was a creative ferment that had a liberating effect on the students, and that was a key ingredient in the success Moholy achieved in realizing his basic aim of nurturing the creative potential of each student. Since there was an effort to avoid any attempt to bring the work of the students to a pre-conceived result, there is no easily recognizable common or “I.D.” look in the work of the students.

There was also an informal, freewheeling atmosphere, including many opportunities for casual contacts between faculty and students. And, since many of the faculty had also been students in one of these schools, it was sometimes not easy to tell the difference between students and faculty. Many students found this milieu to be exciting and stimulating, and open to wide-ranging experimentation.

It had never been Moholy’s aim to train specialists in graphic design, photography, or any discipline that circumscribed. He insisted on a many-sided approach that educated the whole student. He once wrote to Nikolaus Pevsner that education in his school “. . . is more general in scope than a limited vocational training,” and hence “. . . is valid for anyone in any profession whether he be a lawyer, doctor, designer or architect.” Thus the curriculum included academic subjects, with Moholy himself presenting informal seminars on avant-garde literature. There was also a steady stream of guest lecturers and exhibitions. One result of this kind of educational experience was that an individual student would produce work in a variety of media.

The links below provide additional reading, images and data about the people and activities. 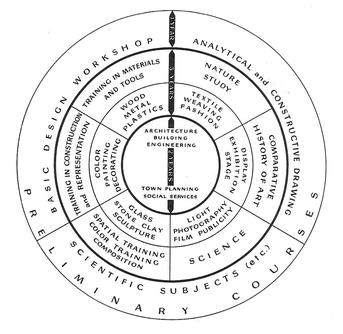 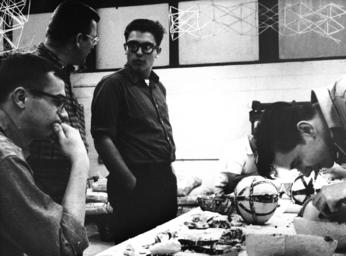 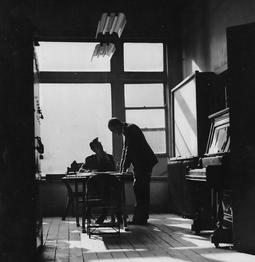 Curriculum diagram from the 1937

“We know that art itself cannot be taught, only the way to it. We have

in the past given the function of art a formal importance, which segregates

it from our daily existence, whereas art is always present where healthy

and unaffected people live. Our task is, therefore, to contrive a new

system of education, which along with a specialized training in science

and technique leads to a thorough awareness of fundamental human

needs and a universal outlook. Thus, our concern is to develop a new

type of designer, able to face all kinds of requirements, not because he is a prodigy but because he has the right method of approach. We wish to make him conscious of his own creative power, not afraid of new facts, working independently of recipes. Upon this premise we have built our program.”

​BCF is an non profit organization dedicated to preserving the legacy of László Moholy-Nagy’s schools. 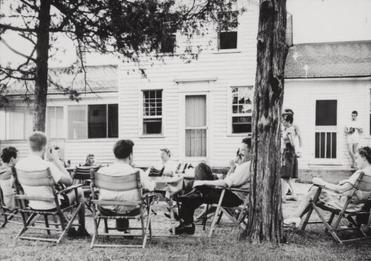